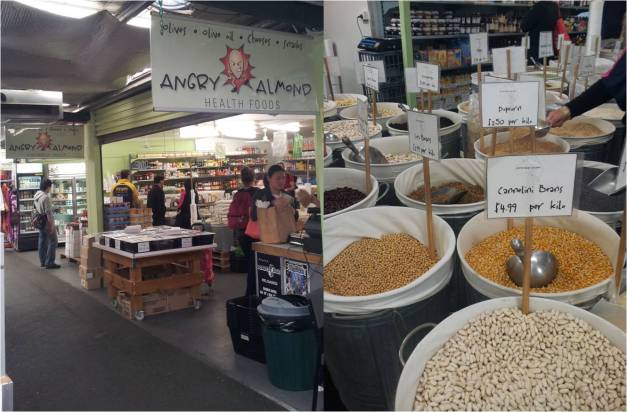 The Angry Almond, nestled in the very back of the Subiaco Markets, is the go-to place for well priced by-weight beans, nuts, herbs, spices, grains, teas, dried fruit, berries, snacks.. I don’t know what it is about these shops with all the barrels of things and scoops, its just nice. Similar to Kakulas brothers/sisters in Fremantle and Northbridge but a bit simpler and without the drool inducing cheese display.

Since discovering this place (guided by my wonderful friend Vik) I have revolutionized my breakfast ritual and at the same time significantly decreased the amount of plastic/packaging I bring into the house (probably saved some $ too!)

1. Start with your grain/fibre base. My favourites are bran flakes, puffed quinoa and corn flakes. The quinoa is really nice as its much better for you than puffed rice and has a great flavour. Never tried quinoa before? Well you definitely should, either like this or cooked up (buy the non puffed version) with a bit of chicken stock. A bit of background sourced from the ever reliable Wikipedia;  “Quinoa was of great nutritional importance in pre-Columbian Andean civilizations, secondary only to the potato, and was followed in importance by maize. In contemporary times, this crop has become highly appreciated for its nutritional value, as its protein content is very high (14% by mass), yet not as high as most beans and legumes. Nutritional evaluations of quinoa indicate that it is a source of complete protein.[14][15] Furthermore, it is a good source of dietary fiber and phosphorus and is high in magnesium and iron. Quinoa is also a source of calcium, and thus is useful for vegans and those who are lactose intolerant.[16][17] Quinoa is gluten-free and considered easy to digest. Because of all these characteristics, quinoa is being considered a possible crop in NASA’s Controlled Ecological Life Support System for long-duration human occupied spaceflights.[18]”

2. Add dried fruits of your choice. I try to go easy on the ratio of fruit to grains because of the sugar content but its nice to have a mix. I pick from dried cranberries, apricots, sultanas, banana, pineapple, paw paw etc. Favourite combo so far is cranberries, apricots (turkish, chopped up) and sultanas.

3. Cook up some crunchy granola. Melt two table spoons of either butter, coconut oil or olive oil (or combination of those), add a good glug of golden syrup, a bit of vanilla extract and some cinnamon (good for boosting your metabolism). Pour in about half a kilo of flat oats (not instant) and mix until its all coated. Put it in the oven at about 180 degrees C until they are slightly brown. They won’t be hard when you take them out of the oven, its the sugar crystallising as it cools that causes that. Once cool break them up into chunks and pop into the cereal mix.

4. Mix it around as much as you can and then store it in a sealed container. I have mine with Greek or natural yoghurt and a dab of honey if it needs it. You can have it with milk but it gets soggy quick, just like corn flakes ordinarily do, so eat fast!

Needless to say, I love it. First time I remember being excited about my weekday breakfast. I don’t add any nuts or seeds because I really just don’t like them. Any add-ins you think would make it even better?